Here's a bunch of mortise locks for those on the f

This old russwin malfunctioned when somebody took

Schlage is nice enough to make their locks compati

I made a replacement handle for my hammer to justi

Fixed a garage door lock today, the square peg use

My poor router usually chews on aluminum doors so

R.I.P. The Canterbury where I enjoyed many a fine 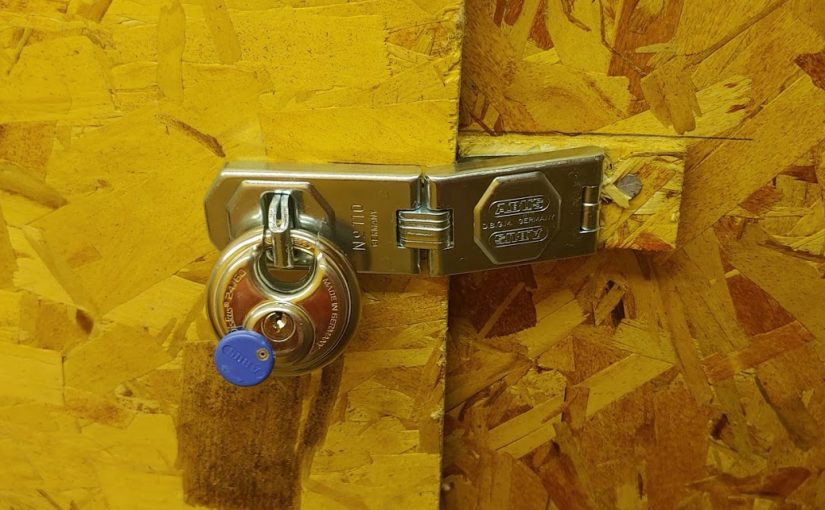 Hasps and padlocks are versatile. While not the most attractive security solution, they are useful for securing openings that weren’t necessarily designed to be locked shut. To actually secure the opening care must be taken installing the hasp so that it can’t be pried off or even worse, unscrewed with the padlock still locked.

I see a lot of storage units because of my job and it is amazing how often I see incorrectly installed hasps where the screws are exposed, or hasps that are just so cheap that it isn’t designed to cover the screws. A lot of hasps are installed with really small screws in material that won’t prevent pulling the hasp out.

When I install a hasp, I try to look at the big picture. The budget constraints, the material of the door or container, the value that we are locking up. Does it have to be hard to pick the lock, copy the key, or destructively remove the padlock? Sometimes a hasp isn’t needed at all! People ask me to install a hasp on their gate all the time so I show them the hole in their gate latch made expressly for the purpose of installing a padlock. Most gates are only six feet tall and therefore easy enough for an able-bodied person to jump over. It would be silly to put a $300 padlock on a gate that can be easily jumped over. It would similarly be silly to put a very expensive padlock on a $5 shackle from the hardware store made of thin 20 gauge steel.

Places to put good padlocks are secured gates that can’t be climbed over, outbuildings, trailers, storage containers and many things more. Many of these things already have built in hasps. Important measurements to make sure that the desired padlock will work in the hasp are the clearance, which is the space between the top of the hasp and the padlock body, and the hasp diameter.

For applications where there isn’t an existing hasp, or the existing hasp was compromised, a new hasp is in order. Top of the line security is a puck lock. Nothing is exposed to drills or angle grinders except the keyway. High security puck locks can be installed on an opening with both surfaces flush with each other. This is actually the easiest installation for most hasps.

Second in security from a puck lock or an integrated hasp lock depends on the application but a shrouded shackle or a disc lock is also pretty secure. These are what I usually install for storage units or really any application where it is worth it for a customer to call me out to lock up something. I sell rekeyable shrouded shackle padlocks which are easily sold to people who call me out to cut off a padlock that they lost the key or combo to.

Below that is a non shrouded padlock. The more expensive ones can be rekeyed. Many applications demand small cheap padlocks because the shackle diameter is only 3/16 or smaller for example. You can’t get a Medeco padlock with such a small shackle size, and even if you could it would be fairly trivial to pry it off.

Once I was paid to remove a padlock from a suggestions box in the municipal tower for the city of Seattle. It was the smallest padlock I’d ever seen, installed in a plastic box. I could have removed it with a pair of scissors probably. For some reason they wanted to get the suggestions out of the suggestion box. I felt it would be a conflict of interest to suggest a better suggestion box with a more secure padlock.

Padlocks are great for emergencies. Sometimes I am asked to secure an opening that has been broken into and a padlock is just the ticket. You can install them in wood, metal, concrete.

Proper selection of a hasp and padlock and secure installation of them is my aim. If you need something secured, give me a call.