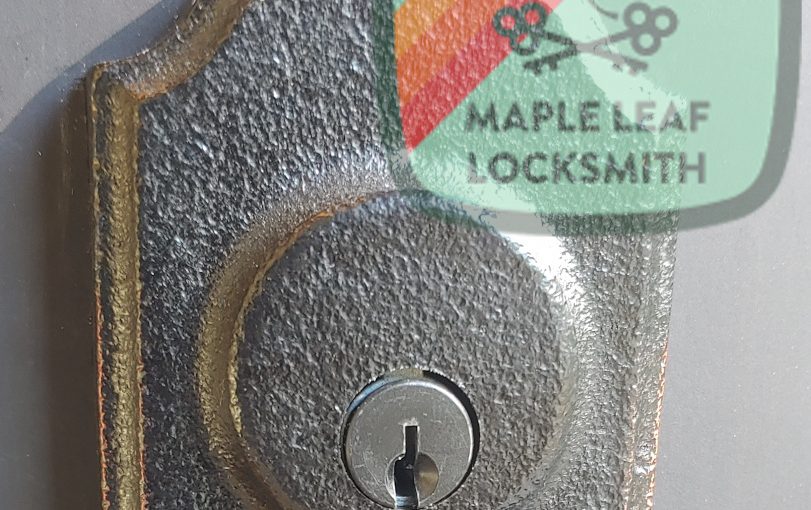 TLDR: you have to drill or grind out the top of the cylinder housing where the bible goes a little bit.

There are two kinds of manufacturers: those that manufacturer products that use industry standards and those that make it up as they go along. They might make their own standards as a form of protectionism or vendor lock-in, or they might do it because it’s too hard to conform to standards.

Whatever the case, in the lock world many deadbolts can take a key in knob or “universal” cylinder, and many can’t. This is a daily explanation I give to people asking me to make one key work in their house full of incompatible locks. The mantra is, “If the key can be inserted into the lock then the lock can probably me made to use that key.”

Then the customer says, “But the key doesn’t work in that lock.” Then you have to explain that you aren’t asking if the key works in the lock, only if the key can be inserted into the lock. It is sometimes a lot to ask for people to understand this concept and you have to explain it several times. Perhaps you will have to re-read the above a few times to understand the conundrum. If you are one of these people maybe you will have to go over to your door and try sticking random keys into your lock to understand the difference between a compatible key and a working key.

Sorry for going off on a tangent. Back to the issue, getting one key to work with a bunch of different locks. Most Schlage deadbolts can have aftermarket key in knob cylinders installed in them so I buy a lot of Kwikset kik cylinders. I charge $40 to put one in a deadbolt. You can’t put a Schlage cylinder in a Kwikset deadbolt though, they use a proprietary cylinder format. To their credit, Kwikset recently started selling Smartkey cylinders in Schlage’s SC1 keyway but if you want to install some other kind of keyway you’re out of luck. Medeco might make aftermarket cylinders in this proprietary format but that’s it as far as I know.

The same thing with Weslock, aftermarket cylinders won’t fit into their locks because of their custom format. However when there is a will and enough money there is a way. You can modify a Weslock to accept the taller bible of a key in knob format cylinder. A customer recently had a blank cheque for getting their house working with one key which is good because I ran into problems rekeying their profile cylinder, but also was willing to pay me $75 to modify their Weslock. The guy who built the house could have very easily bought a Schlage compatible front door lock and saved this guy some money but I digress.

The trick is to take a die grinder or even a good HSS drill bit and ream out the area at the top of the cylinder housing about a 1/16″ until the cylinder slides in. Try to only remove the area at the very top, you don’t want the cylinder rotating around in that big area to the left. You could jam some wood in there I guess. A 5 pin cyinder can reuse the Weslock cylinder housing screw, a 6 pin would require a longer screw. Note the tailpiece is the Weslock original. You need a really long tailpiece and it has to be skinnier than a Schlage, GMS or Ilco tailpiece to fit through the bolt.

I am the Seattle locksmith you've been looking for. High Quality work at a reasonable price delivered in a timely fashion. View all posts by Bjørn Madsen